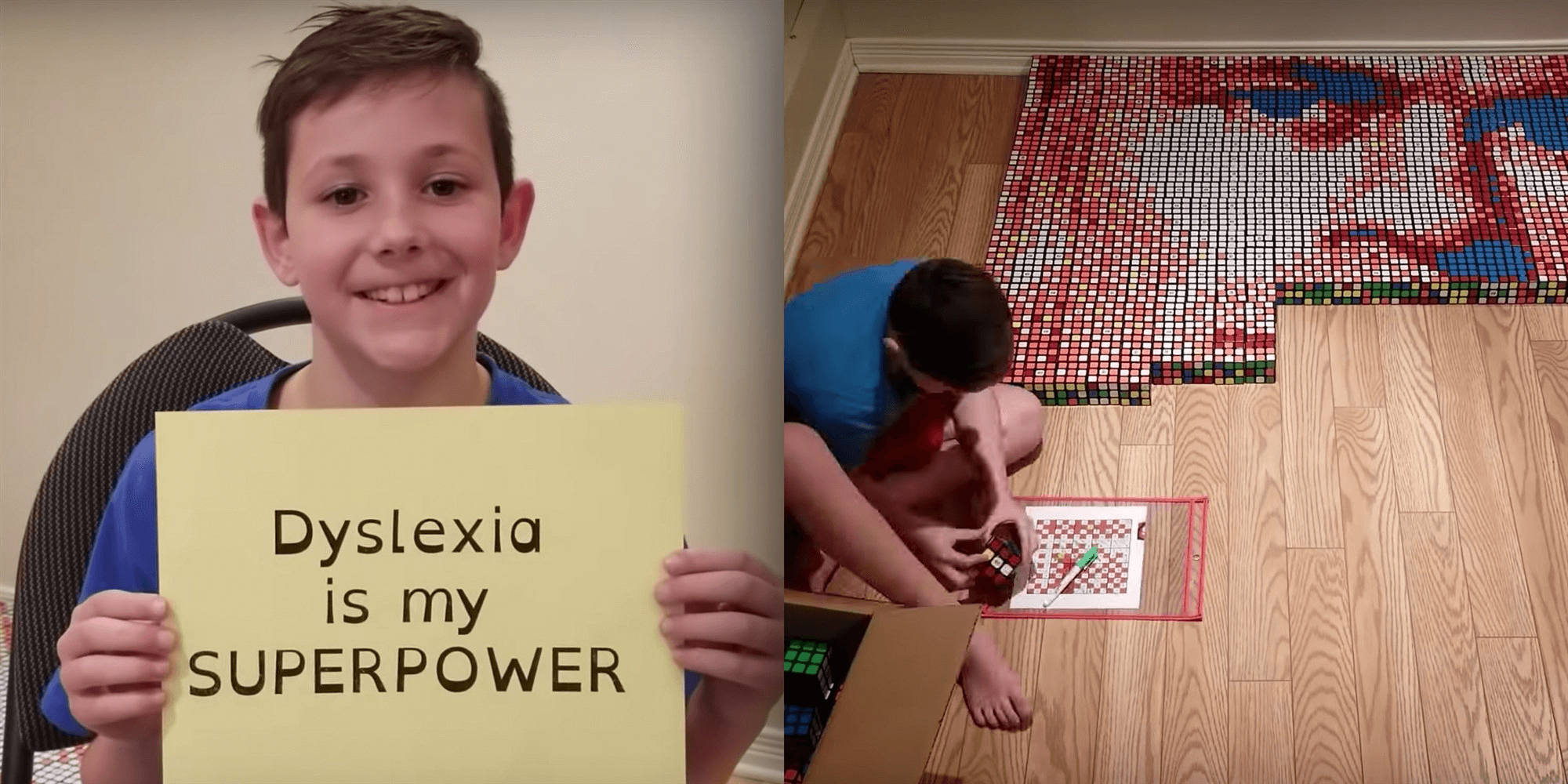 How many Rubik's Cubes does it take to create a jaw-dropping mosaic portrait of professional wrestler John Cena? To be exact, 750 — and a special "superpower." Nine-year-old Benjamin Russo, who has dyslexia, shared a YouTube video in mid-December, where he showed off his impressive talent.

The 2:41-minute clip, which has since gotten thousands of views, begins with the young boy holding up cue cards and introducing himself. "I have dyslexia," he wrote. “I struggle with reading and writing. I mix up my words. I get very frustrated and upset too sometimes but … having dyslexia also means I can do something amazing!”

Next, he begins building the gigantic mosaic right before viewers' eyes. At the end, he smiles and holds up more cards, which read, “Dyslexia is not my disability. Dyslexia is my SUPERPOWER.”

His artistic talent and positive attitude caught the attention of Cena himself, who tweeted on Dec. 29, "This is the embodiment of #NeverGiveUp. Benjamin demonstrates courage, perseverance, vulnerability, tremendous strength... and he’s an ARTIST! I admire you, your work, and your outlook."

In response to Cena's tweet, Benjamin's family wrote on Instagram, "We would have never thought we would have John Cena tweet about it! Amazing! His idol!" 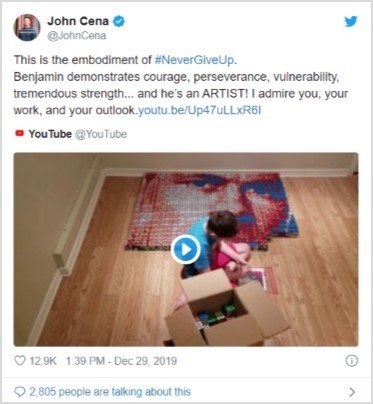 Benjamin's mother, Melanie Russo, told TODAY that the family is "amazed" by the response to his video.

"Our goal is to spread awareness about dyslexia and have Benjamin feel good about something he (can) do that most people can't," she said via Instagram. "Benjamin's spatial awareness/intelligence is linked to dyslexia and that's why it's so effortless for him to be able to copy any pattern on a cube."

Melanie added of her son, "He is also the same quiet, reserved little guy even with all the attention. He does get excited as to how many likes he gets on his YouTube video and especially when John Cena tweeted about him!"

She and her husband, Louis, plan to continue to share Benjamin's mosaics (he's already working on his next one!), as well as more information about dyslexia.

According to the International Dyslexia Association, "Dyslexia is a language-based learning disability. Dyslexia refers to a cluster of symptoms, which result in people having difficulties with specific language skills, particularly reading."

The IDA also emphasizes that dyslexia has no impact on intelligence and that many with dyslexia achieve great success, with examples ranging from Thomas Edison to Stephen Spielberg.

As proven by Benjamin's video, dyslexia isn't something that holds him back — it's what helps him stand out and create awe-inspiring mosaics.