Not even dyslexia can stop Canadian, Benjamin Russo from using his “superpower” to create a stunning portait of WWE star, John Cena. Guess what the portrait is made of? Rubik’s cubes…750 rubik’s cubes to be exact!

According to the nine-year-old’s mother, Melanie Russo, although dyslexia made it difficult for him to read and write, he can memorize and copy patterns at an incredible speed. In fact, it is this “superpower” that makes it easier for him to solve a Rubik’s cube – he can finish just one side of a Rubik’s cube in about one second.

Benjamin’s masterpiece of John Cena only took him five hours over three weeks to complete. Beyond his unique talent, it is his positive outlook on living with dyslexia that is commendable. At the end of a YouTube video shared by him, Benjamin smiles proudly while holding cards, which read “Dyslexia is not my disability. Dyslexia is my SUPERPOWER.”

Thanks to the power of social media, Benjamin’s unique artistic ability eventually caught the attention of the star himself, who tweeted “This is the embodiment of #NeverGiveUp. Benjamin demonstrates courage, perseverance, vulnerability, tremendous strength… and he’s an ARTIST! I admire you, your work, and your outlook.” 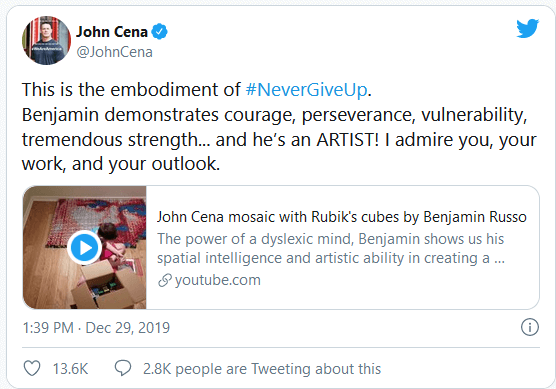 Benjamin’s family told TODAY that they were “amazed” by the response to his video.